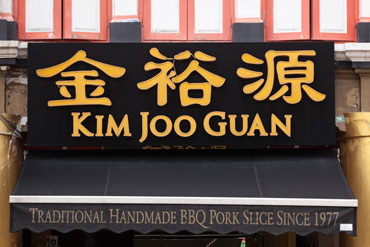 Kim Joo Guan’s traditional recipe has been an integral part of the Ong family spanning four generations, originating from Fujian, China and dating back to the early 20th century.

Our recipe retains its traditional taste and remains a heritage that continues to satisfy our valued customers from all over the world.

Entering the family business at the young age of 13, Mr Ong Bon Seng began as an apprentice in his relative’s bak kwa shop. In 1977, beginning with its first set of premises at Lim Chu Kang, Mr Ong put in many hours to establish a clientele, often handling deliveries personally on his motorcycle.

Through gradual effort, Mr Ong slowly built up the business, increasing the demand for Kim Joo Guan’s bak kwa to eventually necessitate a move to larger premises in Woodlands, and to the current location of its production facilities today.

The ethos of Kim Joo Guan Pte Ltd and its Founder Mr Ong Bon Seng is that they insist on offering only the best quality in their bak kwa products, no matter what.

Giving the utmost attention to the standard of everything from raw ingredients to the preparation process, Kim Joo Guan Pte Ltd makes a point of using only 100% Australian grain-fed fresh pork, chilled instead of frozen to preserve the great taste of its bak kwa. This has won the food manufacturer a loyal clientele of fans, including a number of celebrities.